UN: Israel assault in Gaza may be war crime

Israel’s military actions in the Gaza Strip could amount to war crimes, UN rights chief Navi Pillay said, as Israel continued pounding Gaza for a 16th day. Pillay has also condemned indiscriminate rocket attacks by Palestinian fighters Hamas. Pillay said the killing of civilians in Gaza, especially children, raises concerns over Israel’s precautions and respect for proportionality. Israeli assault’s on Gaza has claimed the lives of at least 648 Palestinians, including dozens of children. More than 4,000 people have been injured.

There seems to be a strong possibility that international law has been violated, in a manner that could amount to war crimes.

The number of Israelis who died from fighting with Palestinian fighters has climbed to 31, including 29 soldiers and two civilians. Pillay said Israeli children and other civilians also had a right to live without constant fear of rocket attacks. The UN Human Rights Council was poised to call for an international inquiry into Israel’s offensive in the Palestinian territories. But Israeli representative to the UN in Geneva Eviatar Manor slammed the council for holding the special session, calling the decision “misguided, ill-conceived and counterproductive” to the ceasefire efforts.

Once again, the principles of distinction and precaution are clearly not being observed during such indiscriminate attacks on civilian areas by Hamas and other armed Palestinian groups. 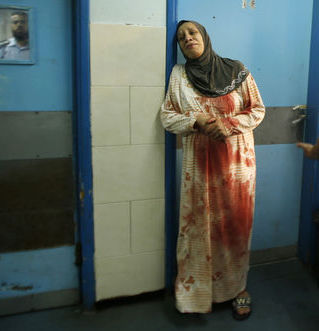