Russian president Vladimir Putin and Ukraine’s newly elected leader Petro Poroshenko have spoken of their desire for a quick end to hostilities in south-eastern Ukraine during their meeting at the D-Day commemorations in France. French President Francois Hollande told a war veteran at the ceremony that world leaders had wanted to use the 70th anniversary commemorations to bring the two men together to discuss the Ukraine crisis. An official in Mr Hollande’s office said the two leaders discussed how Russia could recognise the Ukrainian elections and a possible ceasefire.

They were able to begin a dialogue on possible de-escalation measures including Moscow recognising Poroshenko’s election.

Their brief interaction, which some reports said was as short as one minute while others said lasted 15 minutes, took place after world leaders gathered for a group photograph. Mr Hollande, responding to a question about Mr Putin during a conversation with the war veteran, described the meeting as “friendly”. Mr Hollande invited Poroshenko as his personal guest to the ceremonies for the 70th anniversary of D-Day, saying the event should be used to “serve the purposes of peace”. 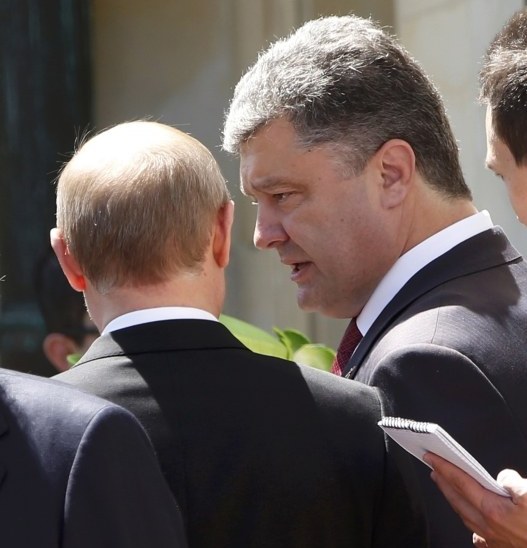