The day that changed the world: ‘Heroes’ of D-Day remembered

French President Francois Hollande has issued a rallying cry to the world calling on nations to fight against threats to peace just as the D-Day troops did 70 years ago. In a moving address delivered on the very Normandy beach stormed by Allied troops on June 6, 1944, Mr Hollande said people needed the same courage as the Allied forces who fought and died to end Nazi tyranny. France’s head of state spoke during an international ceremony staged to mark the 70th anniversary of the D-Day landings—the largest amphibious assault in history.

It’s up to us to have the same vision, the same courage, to be just as bright and have the same determination as those who came to these beaches 70 years ago.

It is likely to be the last major tribute to the sacrifices made by the hundreds of elderly veterans who were in the stands watching, and their comrades who died fighting. Among the heads of state who attended were U.S. President Barack Obama, Russia’s President Vladimir Putin, King Harald V of Norway and President Milos Zeman of the Czech Republic. Mr Hollande hosted the event and sat with Queen Elizabeth on his right. Farther along the row was German Chancellor Angela Merkel. 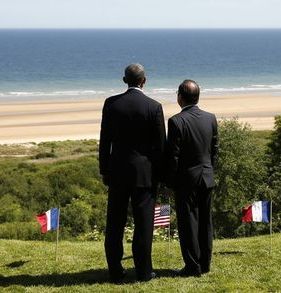