Don’t expect American diplomats to get involved in the charity stunt that has got everyone from billionaires to pop stars and even former presidents drenched by buckets of freezing water. The U.S. State Department has forbidden ambassadors and other high profile foreign-service officers from taking part in the fast-growing Ice Bucket Challenge, which is done in support of Amyotrophic lateral sclerosis (ALS) research. The reason? Federal government ethics rules prevents them from using their public offices for private gain, no matter how worthy the cause is.

For that reason, high-ranking State Department officials are unfortunately unable to participate in the ice bucket challenge.

The challenge itself is simple: people either pledge $100 to ALS research or record themselves getting soaked by frigid water, then post it online and challenge others to do the same. President Barack Obama has declined a dare from Ethel Kennedy, the 86-year-old widow of late senator Robert F. Kennedy. Obama promised to make a gift instead. Pop star Justin Bieber and former U.S. president George W Bush and Microsoft founder Bill Gates are just some of the celebrities who have drenched themselves in icy water in support for the cause. And its popularity has spread around the globe, particularly to Australia, Britain, Canada, Germany and New Zealand. 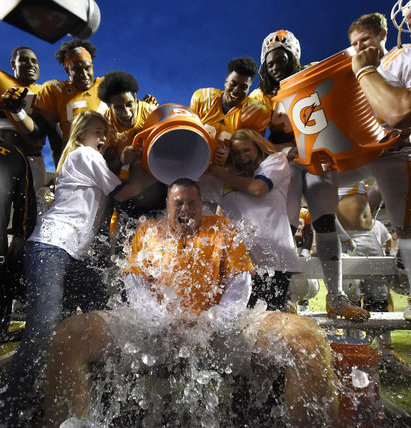