When Mr. Burger met Ms. King, who paid for their wedding?

Burger King is paying the expenses and providing gifts for the wedding of an Illinois couple with an interesting connection to the fast food restaurant chain. Joel Burger and Ashley King accepted the company’s proposal Monday. The couple has been known as Burger-King since they were in the fifth grade together, in New Berlin near Springfield. They announced their engagement this spring with a photo next to the sign at a local Burger King restaurant.

As soon as he said, ‘Joel Burger and Ashley King,’ he started to laugh out loud and pronounced we were ‘Burger King’

Ashley King, on how the couple got their nickname

The name stuck and the two stayed friends, even going to homecoming and prom together, before they actually started dating in college. Now, they are engaged and will combine their last names, so they’ll officially be pronounced Mr. and Mrs. Burger-King.

All we ask in return is that they live happily ever after. And maybe name their first child Chicken Fry. 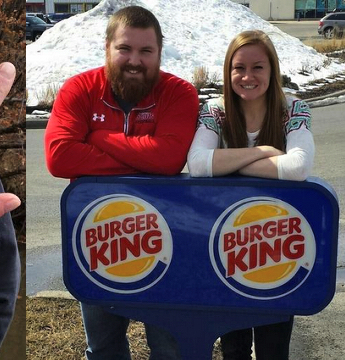