The world’s wooliest sheep has been found in Australia, two farmers believe. Shaun has managed to escape the shears for six years, and was found wandering aimlessly on farmland belonging to Peter and Netty Hazell. His fleece, weighing more than 20 kilograms, became so thick that his eyesight was affected. The Hazells bundled Shaun into a truck and brought him back to their farm, where he will be sheared this week.

They usually fall on their back and can’t get up, get fly struck or the hot weather gets them. We just could not believe that a sheep could have so much wool.

They hope he will break the record for the world’s most fleece-yielding animal—an achievement currently held by Shrek, a sheep found living in New Zealand caves. When he was captured and sheared in 2004, his fleece tipped the scales at 27 kilograms. Peter Hazell, who lives with his wife in Tasmania, is surprised at how healthy Shaun is, considering the Merino sheep fended for himself for so long. A sheep judge believes Shaun’s fleece is enough to create three or four woolly jumpers. 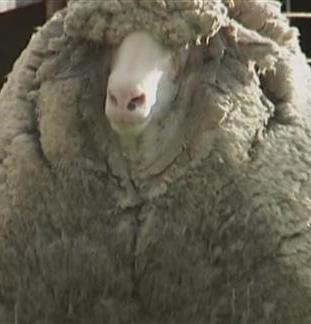