Ukrainian President Petro Poroshenko vowed to “find and destroy” pro-Russian rebels who killed 23 servicemen and wounded nearly 100 in a missile attack on Friday. Poroshenko issued his angry statement following an emergency meeting of his security chiefs called in response to the early morning strike by Russian-made Grad missiles on an army motorised brigade near the border with Russia. The attack, which came as government forces seemed to be prevailing in the three-month conflict, appeared to be the deadliest on government troops since the Ukrainian military ended a unilateral ceasefire on June 30.

All those who used the Grad against the Armed Forces of Ukraine will be found and destroyed.

The pro-Russian separatists launched a volley of Grad missiles at 4:30 a.m. on the border post at Zelenopillya, in Ukraine’s easternmost Luhansk region, military sources said. Ukraine’s Defence Ministry said 19 servicemen were killed and the border guard service said four of its number also died. Military spokesman Vladyslav Seleznyov said on his Facebook page 93 were injured in the Grad attack. Authorities had earlier put the death toll at up to 30 but this was later scaled down to 23.

For every soldier’s life, the militants will pay with scores and hundreds of their own. Not a single terrorist will avoid responsibility; each will get what they deserve. 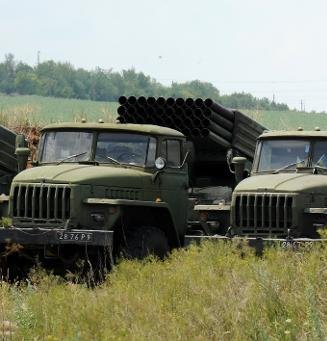