WikiLeaks founder Julian Assange will not leave the Ecuador embassy in London until it is guaranteed he will avoid extradition to the United States, his lawyer said Tuesday. The Australian, who has been holed up in the building for two years, indicated on Monday he would leave the compound “soon” amid reports that he was suffering from a heart condition and other ailments. His lawyer Jennifer Robinson admitted to the Australian Broadcasting Corporation that being cooped up had significantly impacted the 43-year-old’s health but said it was difficult to put a timeline on when he would leave.

[He will leave] as soon as conditions can be negotiated that allow Julian to leave the embassy while his political asylum, to protect him from the risk of extradition to the U.S., is respected.

It was not immediately clear when his legal team would be able to negotiate conditions that would make it possible for him to leave, she said. Assange sought asylum at the embassy in June 2012 to avoid extradition to Sweden, where he faces allegations of rape and sexual molestation, which he strongly denies. He fears extradition to Sweden could lead to him being transferred to the United States to face trial over WikiLeaks’ publication of classified U.S. military and diplomatic documents. 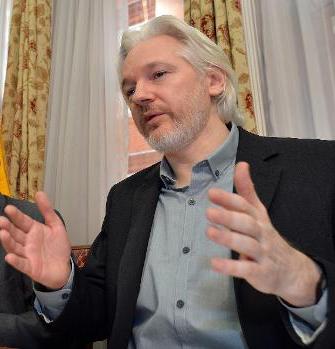