Families of asylum seekers killed in a shipwreck off Australia’s Christmas Island in 2010 are suing the Australian government for negligence, in a move blasted as “shameful.” Fifty people died when a rickety fishing boat crowded with nearly 100 Iraqi, Kurdish and Iranian asylum seekers was dashed against jagged rocks in dangerous seas at the remote Indian Ocean outpost. Human rights lawyer George Newhouse has launched legal action in the New South Wales state Supreme Court on behalf of eight families, claiming the government failed to maintain a proper lookout.

We believe that the evidence will show that the Commonwealth knew, or should have known, that there were vulnerable men, women and children that were on the high seas in a storm and took insufficient steps to look out for them.

Immigration Minister Scott Morrison defended the actions of the government at the time. “Frankly, I think this is a shameful and offensive claim to be making,” he said. It is also claimed that when authorities found out the boat was foundering, the systems in place and operational life-saving vessels to rescue them were not adequate. At the time, authorities said they were not aware the boat was approaching Christmas Island due to the predawn darkness and “extreme” weather conditions. The terrified group on board drifted for about an hour after losing engine power before the surging waves smashed the vessel apart on the rocks.

This is like someone who has been saved from a fire suing the firemen. 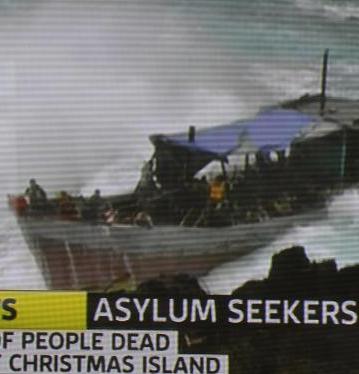