Israel launched more than 20 aerial attacks in Gaza on Saturday, killing five Palestinians, and militants fired rockets at Israel as the conflict entered a second month, defying international efforts to negotiate an agreement for an extended ceasefire. Medical officials in Gaza said two Palestinians were killed when their motorcycle was bombed and the bodies of three others were found beneath the rubble of one of three bombed mosques. The air strikes which lasted through the night also bombed three houses, and fighter planes also strafed open areas, medical officials said. The Israeli military said that since midnight it had attacked more than 30 sites in the coastal enclave where Hamas Islamists are dominant, without specifying the targets.

Our hope is that the parties will agree to an extension of the ceasefire in the coming hours.

Heavy civilian casualties and destruction during Israel’s campaign against militants in packed residential areas of the Gaza Strip have raised international alarm over the past month, but efforts to prolong a ceasefire at talks in Cairo failed. The U.S. urged Israel and the Palestinians to do what they could to preserve civilians after having failed to extend their ceasefire. Spokesman John Earnest said on Friday “the United States is very concerned” about the renewed violence. 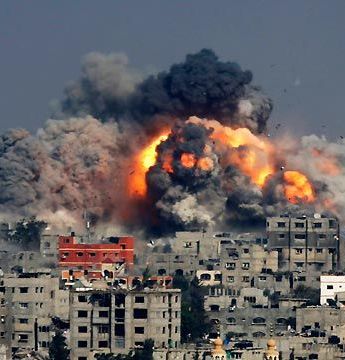