In a bitter irony, Islamic State extremists have used American armoured vehicles and weapons seized from the hapless Iraqi military to defeat Kurdish fighters who were blocked from acquiring just such equipment. For years, Kurdish officials have asked the Obama administration to let them buy U.S. weapons. But, U.S. officials have always insisted they could only sell arms to the government in Baghdad, even after Prime Minister Nouri al-Maliki broke a written promise to deliver some of them to the Kurds, whose peaceful, semi-autonomous northern region has been the lone success story to come out of the 2003 U.S. invasion. However, the tide may be shifting; the U.S. has sought to halt the extremists’ advance with airstrikes, but Kurdish officials also say Washington has promised to begin sending them arms. A growing number of voices in the U.S are also calling for the Kurds to be openly and speedily armed.

The only way to confront this threat is to arm Iraqi security forces and Kurdish forces, and yet we’re doing nothing to support either one of those. It’s an existential threat, so why we are not in there at least equipping and arming them?

Meanwhile, President Obama’s military strategy of trying to contain - not destroy - the Islamic State leaves open the questions of how deeply the U.S. will be drawn into the sectarian conflict, and whether airstrikes alone can stop the militants’ momentum. Obama insists he will not send American ground troops back to Iraq after having withdrawn them in 2011. The Obama administration steadfastly insists airstrikes and humanitarian airdrops are not the start of an open-ended campaign to defeat the militants. Critics say is the approach is too narrow to contain the ‘inherently expansionist’ Islamic State. 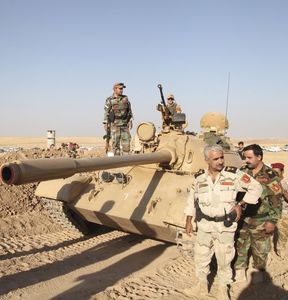