Heavy fighting erupted on Sunday around Tripoli International Airport, where rival militias have been battling for control, killing at least four people and forcing thousands from their homes, local residents and witnesses said. The battle pits fighters from Zintan in the northwest and their allies, who controlled the airport since the ousting of Moammar Gadhafi, against armed groups tied to Misrata, a western coastal town. The airport standoff is the most serious violence in Tripoli since the 2011 fall of Gadhafi, with Libya’s fragile government unable to assert authority over rival brigades of former rebels fighting for political and economic power.

The shells are landing on us from all warring militias. We couldn’t reach some families until now.

Militias used heavy anti-aircraft cannons, Grad missiles and rockets in exchanges around the Qasr Ben Ghashir neighbourhood, trapping some families while several thousand others fled the fighting around their homes. The clashes have all but suspended international flights from Libya, damaged more than a dozen planes parked at the airport and prompted the United Nations to pull its staff out of the country because of security fears. 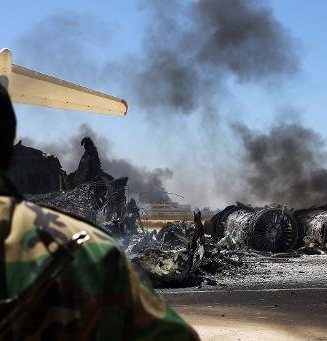