A passenger ferry carrying hundreds of people has capsized in a river in Bangladesh, officials said. At least two people were killed in the incident and there are fears the death toll could rise much higher, authorities said. Horrified villagers watched from the shore as the boat capsized. It was unclear exactly how many people were on board the MV Pinak because ferry operators in Bangladesh rarely maintain passenger lists, but local media said there were about 250 passengers. At least 44 people survived by swimming to shore.

We have heard that the ferry was overloaded with passengers and the river was rough.

The ferry capsized in the Padma River in Munshiganj District, about 45 kilometres south of the capital, Dhaka. More than four hours after the ferry capsized, authorities said they were still waiting for a larger vessel needed to launch a proper rescue operation. Local police officer Khalid Hossain said two bodies had been recovered so far. As news spread of the accident, about 500 people including relatives of the missing gathered by the water, many of them in tears. 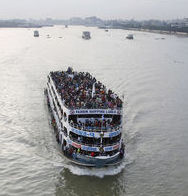