Everyone’s favourite pint-size superhero is back. Last fall, the world fell in love with Miles Scott, who became affectionately known as Batkid, thanks to the efforts of Make-a-Wish Foundation and the support of 25,000 enthusiastic citizens of Gotham (San Francisco). Now Miles’ story is being made into a documentary, adorably titled “Batkid Begins,” directed by Emmy Award-winning director Dana Nachman. An Indiegogo campaign is halfway to its funding goal of $100,000; the money will be used to produce a soundtrack and special effects for the film (because every superhero film needs special effects).

Now after months of interviewing the key players who made the day possible, Dana will leave the audiences to decide; did Miles need the world for inspiration? Or did the world need Miles?

A message on the Indiegogo campaign Web page

The story of the tiny Caped Crusader, a five-year-old leukemia survivor who saved the day and restored order to the city as only a superhero can, had reached more than two billion people last fall. Miles, in full costume, took the Internet by storm, warming the hearts of many other famous Batmans. “I mean, wonderful,” Christian Bale told Vulture. “This little kid, oh my God—what a wonderful day for the little fella! It’s just fantastic, seeing all those people who were out there to support it.” The trailer debuted at this year’s Comic-Con in San Diego, and as the message on the Indiegogo campaign alludes, there’s much more to this story than simply granting a young boy’s wish.

One thing that struck me was how many people were holding up signs saying, ‘Save Us, Batkid,’ and I looked at those signs and I thought, ‘You mean that literally.’ 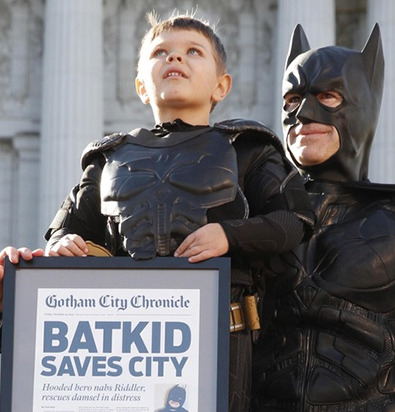