'Battle will rage in Baghdad': Militants surge towards capital

Militants who stormed cities in northern and central Iraq now plan to launch a wave of attacks on the capital Baghdad, their leader has reportedly warned. In a statement translated by intelligence officials, Abu Mohammed al Adnani, who heads the Islamic State of Iraq and the Levant (ISIS), promised battle would “rage” in the city and Karbala further south. It came as officials in Iraq allegedly asked the U.S. to consider air strikes, including drone attacks, to halt the militants’ progress.

The battle is not yet raging but it will. Do not relent against your enemy.

ISIS, an al Qaeda splinter group, seized control of Tikrit yesterday after a devastating show of strength in Mosul, where more than 500,000 people have fled. Iraqi police said hundreds of prisoners were freed in Tikrit, the home town of former dictator Saddam Hussein, after militants arrived in a convoy of more than 60 vehicles. The insurgents took over local government buildings and set fire to the court house before heading back out on the road. In a statement, the UN Security Council said it “deplored in the strongest terms the recent events in the city of Mosul”. 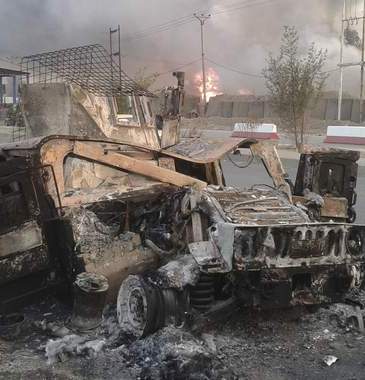