German scientists said yesterday that moon samples collected from NASA’s Apollo missions during the 1960s and 1970s have shown new evidence that the moon formed when a young Earth collided with another celestial body. The collision between an early form of Earth and a planetary body named Theia some 4.5 billion years ago is put forth by what scientists call the Giant Impact Hypothesis of moon formation. While most experts support the notion, they say the only way to confirm such an impact is to study ratios between the isotopes of oxygen, titanium, silicon and others.

We can now be reasonably sure that the Giant collision took place.

Until now, researchers studying lunar samples that arrived on Earth via meteorites have found that the Earth and moon were quite similar in makeup. But using samples collected from the lunar surface by NASA’s Apollo 11, 12 and 16 moon missions, and more advanced scientific techniques, scientists found something new. According to theoretical models of the collision, the moon would have formed mostly from Theia, at between 70-90 percent, with some 10-30 percent coming from Earth. But researchers now say the moon could be a 50/50 mixture of Earth and Theia remnants, though more study is needed to confirm. 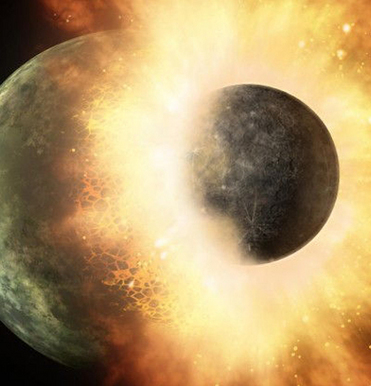