United Kingdom’s Foreign Office is investigating reports that Islamic State (IS) terrorist “Jihadi John” - who murdered two British and two American hostages - has been wounded during U.S. airstrikes in Iraq. Named after Beatle John Lennon due to his British background, the man, who speaks with a London or south-east accent, is believed to be responsible for the killing of Britons David Haines and Alan Henning, and Americans James Foley and Steven Sotloff. He was reportedly injured during last week’s airstrikes on a summit of IS leaders in the Iraqi town of al Qaim, close to the Syrian border. A nurse who treated several militants wounded in the strikes was quoted by The Mail on Sunday as saying the Briton was among the injured taken to al Qaim General Hospital.

The one who slaughtered the journalists.

The extent of the man’s injuries is not known. A Foreign Office statement said: “We are aware of reports. We cannot confirm these reports.” Videos released by IS have shown the man dressed in black with his face masked while brandishing a knife. IS leader Abu Bakr al Baghdadi is also said to have been wounded in the U.S.-led attack, according to the newspaper. U.S. officials said this week they could not confirm whether Baghdadi was hit during the airstrike near Fallujah.

We have received the reports in the last few days. We don’t have any representation inside Syria, and so it is difficult to confirm these reports. 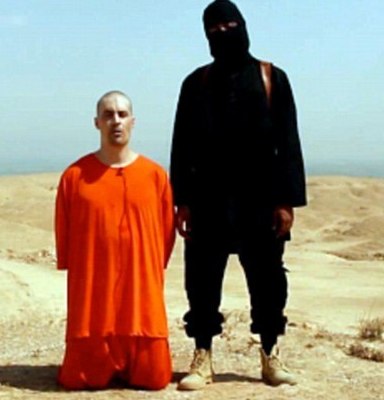