CCTV footage which purports to show the moment a Palestinian teenager was kidnapped before being killed has been obtained by Sky News. The video allegedly shows men bundling Mohammed Abu Khadair into a car in East Jerusalem, shortly before his burned body was found in a forest. The footage emerged as tensions heightened in the region with Israel’s military sending troop reinforcements to its border with the Gaza Strip. The Khadair family say their 17-year-old was on his way to the local mosque to attend the morning prayer when he was taken.

(The poiice will) work as quickly as possible to find out who was behind the heinous murder of the youth.

His body was found around 5am by police in a forest in West Jerusalem. The incident took place hours after large crowds of Israelis demonstrated in Jerusalem. They called for tougher action to be taken by the government in response to the kidnap and murder of three Israeli teenagers, whose bodies were discovered on Monday afternoon. Meanwhile, the official Twitter feed of the Israel Defence Forces was hacked, stating that rockets had hit a major nuclear facility, causing a leak. The IDF later confirmed the tweet was a hoax. 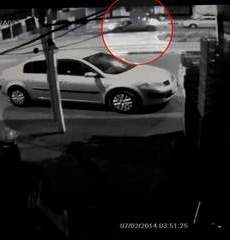