A Chinese city has banned people with head scarves, veils and long beards from boarding buses, as officials battle unrest with a policy that critics said discriminates against Muslims. Xinjiang, home to the Muslim Uighur people, has been beset for years by violence that the government blames on Islamist militants or separatists. Police have offered money for tip-offs on everything from “violent terrorism training” to individuals who grow long beards.

Those who do not comply will be reported to the police.

In July, authorities in Xinjiang’s capital Urumqi banned bus passengers from carrying items ranging from cigarette lighters to yogurt and water, in a bid to prevent violent attacks. Hundreds have died in unrest in Xinjiang in the past 18 months, but tight security makes it almost impossible for journalists to make independent assessments of the violence. About 100 people were killed when knife-wielding attackers staged assaults in two towns in the region’s south in late July, state media said, including 59 “terrorists” shot dead by police. A suicide bombing killed 39 people at a market in Urumqi in May. 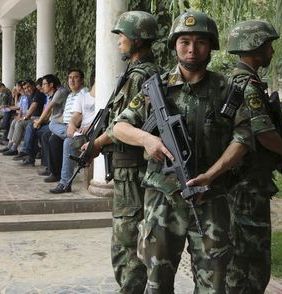