Italy slides back into recession despite strong recovery across Eurozone

The Italian economy shrank by 0.2 percent in the second quarter, dragging the eurozone’s third-biggest economy back into recession and further behind EU neighbours. The contraction, which follows on the heels of a fall in the first quarter, will be a sharp blow for Prime Minister Matteo Renzi’s government as the country struggles to pull out of the worst recession since World War II. The news hit the Italian stock market which was showing a fall of 3.32 percent minutes after the data was published.

The Eurozone recovery, which began in spring last year and has gradually spread around most of the currency area, has not yet taken hold in Italy.

The result was worse than expected, with analysts having forecast between a 0.1 percent contraction to a 0.1 percent increase in growth. It is the third time Italy has slipped into recession since 2008. Italy “is struggling to pull out of the recession because it is a very deep one,” Finance Minister Pier Carlo Padoan said in an interview with Il Sole 24 Ore. 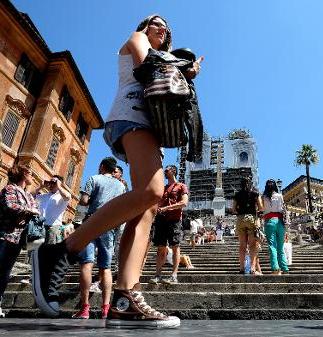