"People power" has saved a commuter after he became trapped between a train and a station platform. Dozens of passengers helped tilt the carriage to free the man, who slipped as he was boarding just moments before the train was due to leave Sterling Station in western Australia for Perth. Security cameras captured the fall on Wednesday which resulted in the passenger’s left leg becoming wedged in a two-inch gap between the carriage and platform.

This is a real case of passengers of working together … and people power are the perfect words to describe it.

Station staff’s attempts to pull him free failed, and passengers were initially told to move to the opposite side of the carriage in the hope their weight would shift it away from his leg, without success. Eventually, they were asked to get off the vehicle and help push the train to free up enough space for him to be lifted back up to safety.

We were really fortunate that the staff were there straight away … and all of the passengers not only listened to the instructions from staff, but pitched in and helped. 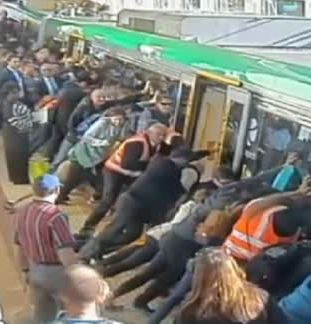