A family whose house was destroyed when a plane crashed into it have told how their son would have been killed had they not let him sleep with them. All five people on board the aircraft were killed when it hit the property in Balsas, northeast Brazil. Earlier that evening, Marcio Andre had argued with his 11-year-old son, Augusto Thiago, who wanted to sleep in his parents’ bedroom. Luckily the boy got his way. The crash left his bedroom in ruins.

It pays to be indulgent sometimes.

His mum Sabrina Ertell described the shock of the incident, saying: “We were fast asleep when a loud sound like an earthquake or tornado hitting woke us. My husband opened the door saw the fire and grabbed our son and we jumped out of the bedroom window.” The Minuano Embraer plane was transporting Maria de Jesus Cruz e Silva, 87, from a hospital in Balsas to Teresina, in the neighbouring state of Piaui on Sunday. Her daughter Francisca Pereira, and grandson Alan Patric Silva Setulvedo, both died in the tragedy as well as the pilot Delano Martins Coelho and his wife Lorena Alves de Lima. 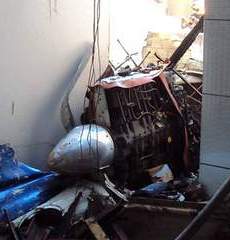