Next month, professional Candian triathlete Kirsty Smith, along with competitors such as U.S. Olympian Nick Symmonds, will race for boozy bragging rights at the world beer mile championships in Austin, Texas. Smith will take aim at the women’s world record of six minutes 28.6 seconds, set by Chris Kimbrough — a 44-year-old mother of six — earlier this month. Smith plans to run a couple practice beer miles in advance. She’ll bring along a friend to record it on video, lest she breaks the world record in practice.

I’ve been practising chugging beers, as ridiculous as it sounds. My guy friends like it, they think it’s hilarious. They’re like ‘We’ll race you chugging beer.’ Even my mom’s boyfriend wants to race me in drinking.

The beer mile was born, so the story goes, back in the late 1980s, when a group of Canadian distance runners were enjoying a post-workout beer. “We thought it would be a great idea to combine running and beer drinking,” says Ian Fallas, one of the runners present on that historic night. In the beer mile, competitors consume four cans of beer (no less than 355 millilitres and a minimum of five per cent alcohol) over the course of a mile. Run on a 400-metre track, competitors drink one can prior to each lap. Runners who vomit before finishing must run a penalty lap.

You’re pretty drunk really quickly. It doesn’t hit you until a few minutes after, but you just had four beers in like six minutes, and for me, that’s a lot of alcohol. 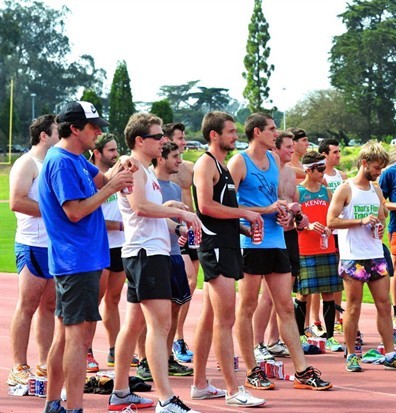