Just imagine the fish you could catch with a worm that is five feet long. That might be what these adventurers thought when they discovered a massive earthworm that stretched yardsticks at a full metre-and-a-half in length. The photos were submitted to Project Noah, a global study app that encourages nature lovers to document the wildlife they encounter by uploading photos to their phones.

The giant Gippsland earthworm can live for about 10 years, and rarely ever makes it to the Earth’s surface.

In this case, this massive worm was found in “extremely rich forest soil” in the foothills of the Sumaco Volcano in Ecuador. According to the site’s forum, it’s been identified as a Martiodrilus crassus, which is Latin for “worm which feeds on dogs and small children.” However, at five feet in length, it’s not the longest recorded worm, nor even the planet’s biggest species of earthworm. The giant Gippsland earthworm, found in the clay soil along streams in Victoria, Australia, can stretch to an impressive 9 feet in length. 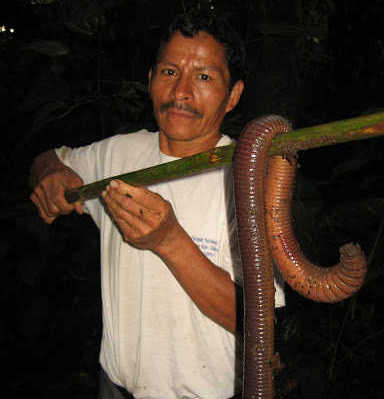