NASA successfully launched its new Orion spacecraft into orbit at the second attempt on Friday, after high winds and rocket problems delayed the first launch bid 24 hours earlier. The unmanned four-hour flight will test crucial systems, like the heat shield and parachute splashdown, on a spacecraft that could one day take humans to an asteroid, the Moon or Mars. It is the first launch in more than 40 years of a U.S. spacecraft intended to carry humans beyond the Moon. Orion blasted off aboard a United Launch Alliance Delta IV Heavy rocket from Cape Canaveral in Florida.

I think it’s a big day for the world, for people who know and like space. Everything may not go right, but everything that does go right means that we’ve bought down one more risk on this vehicle.

The 24-storey-tall rocket soared out over the Atlantic Ocean, punching through partly cloudy skies as it headed into orbit. Cars packed roads for miles around the launch site as thousands tried to catch a glimpse of the launch. Orion will orbit the world twice on its inaugural flight and will shoot for a high point of 3,600 miles, farther than any spacecraft built for humans has gone since the Apollo moon programme. The spacecraft will then plunge into the waters off San Diego, California, to be retrieved by the U.S. Navy. Sensors on the capsule should tell NASA if the temperatures inside were survivable for a potential crew, even as the spacecraft itself heated to 2,200 Celsius (4,000 degrees Fahrenheit) during re-entry to the Earth’s atmosphere at a velocity of 20,000mph. About $370m worth of equipment is at stake in the launch. 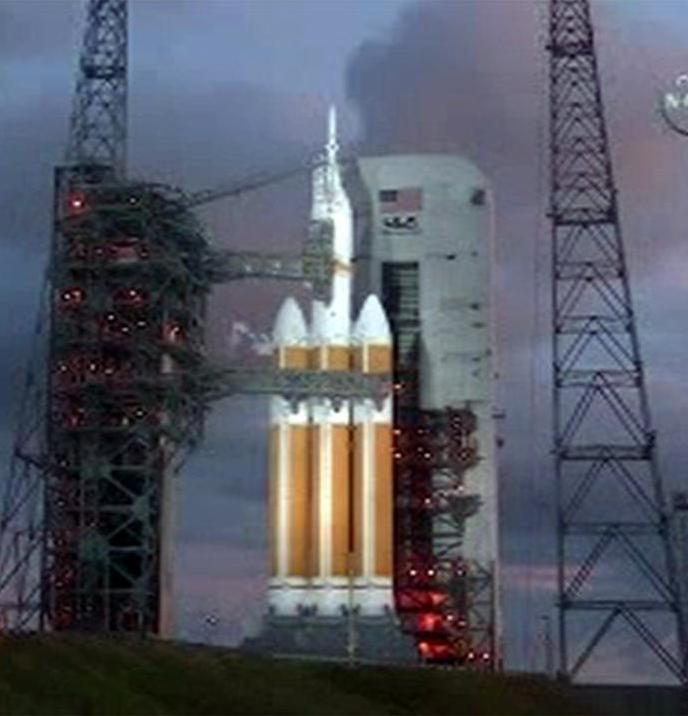