'Dead' girl, aged three, wakes up at her own funeral in Philippines

A 3-year-old girl pronounced dead after suffering a severe fever has apparently surprised mourners at her funeral. The girl was declared clinically dead by medical personnel in Zamboanga del Sur, Mindanao, on Friday. During her funeral service on Saturday, however, she apparently began moving her head before her family took her out of the coffin.

During that time, the attending clinic personnel and physician confirmed that the young patient had no more pulse and was clinically dead last Saturday morning about 9am.

Police senior inspector Heidil Teelan said one of the family members noticed the girl move her head as they were inspecting the coffin. “This prompted them to check and confirmed the girl had pulse and was alive,” he said. The condition of the girl was unknown. 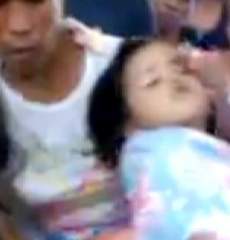