A Ukrainian transport aircraft was “probably” shot down from within Russian territory, Ukraine’s defence ministry has claimed. Pro-Russian rebels had previously claimed they had shot down the AN-26 transporter. Ukrainian officials announced earlier that they had lost contact with the aircraft’s crew near rebel-held Luhansk at around lunchtime on Monday, local time. The defence ministry said some members of the crew of the downed plane had been in contact with the army’s general staff.

A rocket was used in the attack, said Defence Minister Colonel General Valery Heletey. At the same time as the announcement was made, Russia said it has invited monitors from the OSCE security monitoring group to two of its border crossings with Ukraine as a sign of “goodwill”. Fighting has been intensifying around Luhansk as government forces have been stepping up efforts to disrupt rebel lines. Ukraine’s military said its warplanes inflicted heavy losses on the separatists during air strikes overnight. 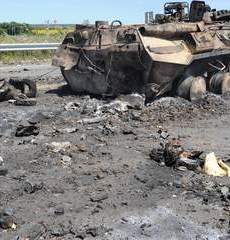