Driver ‘shaken up’ as axe flies through car window on U.S. highway

A motorist and passenger escaped unscathed after an axe hurtled through their car’s windshield along a busy stretch of Massachusetts highway. The axe became dislodged from the back of a lorry just north of Boston and broke the glass of the car behind it before becoming lodged in the dashboard, state police said. A picture posted on the department’s Facebook page showed how close the axe came to hitting the vehicle’s passenger.

If he had been speeding, the increased velocity of his car would have increased the power of the axe’s impact, meaning it could very well have gone through the glass and injured his passenger.

"Thankfully, the axe only went halfway through the windshield," the Facebook post said. Authorities said the passenger was "shaken up" but not injured. The motorists were not identified. State police said it was fortunate the driver of the car was obeying the 65mph (105kph) speed limit at the time of the accident. The driver of the landscaping lorry was cited for failure to secure cargo, which carries a $200 fine. 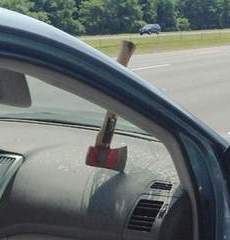