A US doctor infected with ebola has insisted the only available dose of an experimental serum go to a fellow American patient in Liberia, as one of the countries worst hit by the disease declared a state of emergency. Dr Kent Brantly (pictured above) and missionary Nancy Writebol are both in a “stable but grave condition”, according to an aid organisation, although his condition deteriorated slightly overnight. The North Carolina-based Samaritan’s Purse charity said in a statement: “Yesterday, an experimental serum arrived in the country, but there was only enough for one person. Dr Brantly asked that it be given to Nancy Writebol.”

Even as he battles to survive ebola, this heroic doctor is still focused on the wellbeing of others.

The charity also said Dr Brantly, 33, had been given a unit of blood from a 14-year-old boy who survived ebola because of the American’s medical care. It is hoped the boy may have developed antibodies that could help Dr Brantly fight off the infection, which has no vaccine or specific treatment. In Sierra Leone, which accounts for around a third of all deaths from the disease, President Ernest Bai Koroma declared a state of emergency, saying ebola “poses as an extraordinary challenge”. 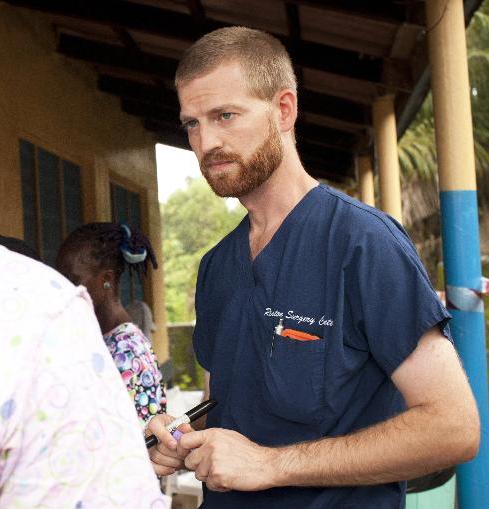