Ebola virus is ‘out of control’ in West Africa

A second outbreak of the Ebola virus in West Africa has been described as “out of control” by Bart Janssens, the director of operations for Doctors Without Borders. The outbreak, which began in Guinea either late last year or early this year, had appeared to slow before picking up pace again in recent weeks, including spreading to the Liberian capital for the first time. More than 330 people have died of Ebola this year in Guinea, Sierra Leone and Liberia, according to the World Health Organization.

This is the highest outbreak on record and has the highest number of deaths, so this is unprecedented so far.

Armand Sprecher, a public health specialist with Doctors Without Borders

The Ebola virus, which causes internal bleeding and organ failure, spreads through direct contact with infected people. There is no cure or vaccine, so containing an outbreak focuses on supportive care for the ill and isolating them to limit the spread of the virus. The latest outbreak is particularly challenging because it began in an area where people are very mobile and has spread to even more densely populated areas, like the capitals of Guinea and Liberia. The disease typically strikes sparsely populated areas in central or eastern Africa, where it spreads less easily. 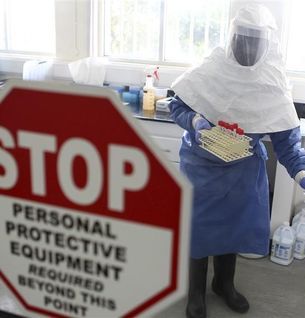