Seven Egyptian men were jailed for life on Wednesday for attacking and sexually harassing women during rallies and celebrations in Cairo’s Tahrir Square. The sentences were the longest since the president vowed to crack down on sexual assaults in June and the government criminalised sexual harassment, amid widespread criticism from activists and lawyers on its record on tackling such abuse. The verdict may ease concerns that Egyptian authorities have done little to tackle widespread sexual harassment.

I have come to tell you and every Egyptian woman that I am sorry. I offer my apologies to all Egyptian women.

President Abdel Fattah el-Sisi, speaking to one of the victims of the attacks at his inauguration

The attacks took place as thousands of people gathered on the streets, raising new worries about Egypt’s commitment to fighting sexual violence. A video was posted on YouTube showing a naked woman with injuries on her hip being dragged through a large crowd toward an ambulance. It drew a public outcry and led further victims to come forward. Sexual assault was rampant at demonstrations during and after the 2011 uprising that ousted President Hosni Mubarak and has been common for a decade at large gatherings in Egypt. 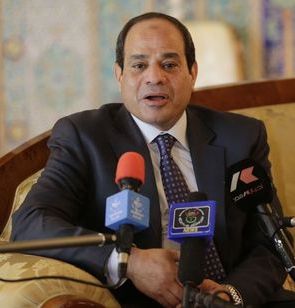