The killing of more than 1,000 protesters last year in Egypt probably amounted to crimes against humanity, a report has found. The deaths of demonstrators at two protest camps in Cairo were “meticulously planned at the highest levels” and carried out in a systematic and methodical way, according to the report by Human Rights Watch (HRW). In a 188-page report based on a yearlong investigation, the New York-based group urged the United Nations to look into six incidents involving killings by security forces of President Mohammed Morsi, who was overthrown by the army in July 2013.

In Rabaa Square, Egyptian security forces carried out one of the world’s largest killings of demonstrators in a single day in recent history.

The report also calls for a probe into the role of Egypt’s current president, Abdel Fattah el-Sisi, who was head of the military at the time of the operations. Egypt barred the head of Human Rights Watch from entering the country ahead of the report’s release. Hundreds of supporters of Morsi’s Muslim Brotherhood have been killed and thousands arrested since he was ousted, with the largest number of deaths taking place during the storming of two protest camps by security forces on Aug. 14, 2013. 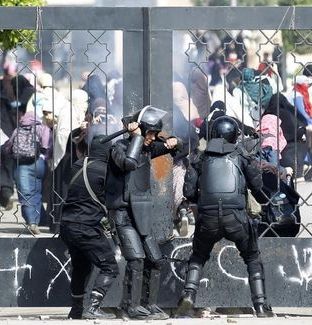