Police are hunting an England fan who bit another fan’s ear off after the national side’s World Cup defeat against Uruguay. The victim was left with half his left ear ripped off and bloodied in the attack, police have confirmed. The attack happened before Uruguay and Liverpool striker Luis Suarez was banned from the competition for biting an Italian player. But details of the attack have only just emerged. Video footage obtained by the Sunday People appeared to show the moment the attack took place on the top tier of the Arena Corinthians.

We were made aware during the England vs Uruguay match in Sao Paulo that an incident had taken place which resulted in an England fan having a portion of his ear bitten off by another England fan.

Several men can be seen in a melee before one is led away by stewards. When asked what happened, the victim appears to tell the camera: “He bit off my ear.” Blood can be seen dripping down his neck but he continues to smile and laugh. Former Liverpool striker Stan Collymore tweeted that he had seen the footage and claimed it would be “the biggest story in the UK, especially who did it”. No arrests have been made yet but interviews with witnesses gave police a name for the alleged attacker, said Chief Superintendent Rachel Barber.

Efforts are ongoing to identify the suspect and bring him to justice either in the UK or, if possible, back in Brazil where the offence occurred. 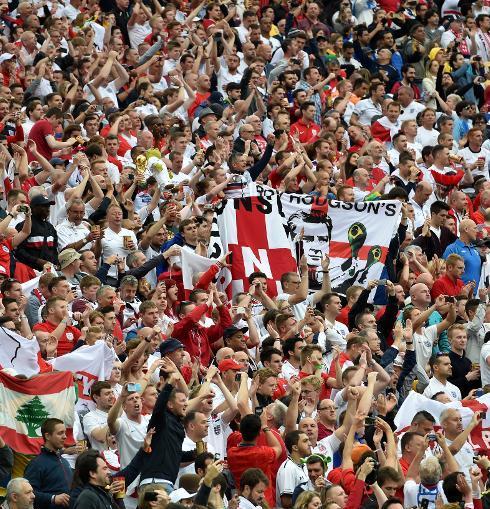