Former boxing world champion Amir Khan has been arrested on suspicion of two assaults in Bolton. Khan, 27, was held after two teenagers were attacked in the early hours of Friday. A Greater Manchester Police spokesman said police were called following reports of an assault on the two 19-year-old men. Their injuries were not serious and they refused treatment from paramedics who attended the scene. Khan, a former WBA and IBF light welterweight champion, has been released on bail until mid July. His spokesman confirmed Khan had been questioned by police, said he expected the case to be dropped and that the media had seen the allegations “blown out of all proportion”.

All nonsense please don’t believe what you read. I’m home with my family and nobody got beat up.

Amir Khan, in a later tweet about the incident 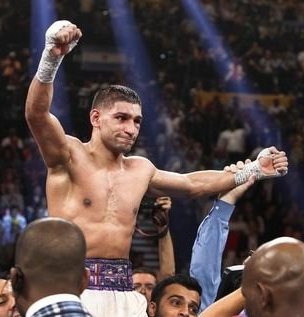