The former dictator of Panama is suing the makers of “Call of Duty” after appearing as a villain in the video game series. Manuel Noriega spent almost 20 years in a Miami prison on drug trafficking charges after he was ousted as leader of the Central American state following a 1989 U.S. invasion. The 80-year-old—who is now in a Panama prison—is seeking damages from game publisher Activision Blizzard.

In an effort to increase the popularity and revenue generated by ‘Black Ops 2,’ defendants used, without authorisation or consent, the image and likeness of plaintiff in ‘Black Ops 2.’

Noriega says the game portrays him as a “kidnapper, murderer and enemy of the state” in the game “Call of Duty: Black Ops II.” The game has a character of the same name, who reneges on a CIA deal and betrays the game’s main characters. He then shoots members of the Panama army. Noriega wants damages for unjust enrichment, unfair business practices and violation of common-law publicity rights—but not for libel. 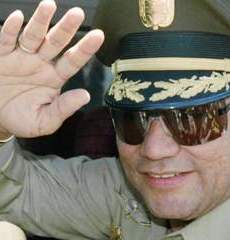