A mutant worm that can never get drunk has been created by scientists. They changed a neuron channel to block the effects of alcohol - and believe the discovery could be used to develop a drug to stop humans getting drunk. Such a drug would be useful for alcoholics, as it would counteract the addictive intoxication feeling caused by alcohol.

The way we tweaked it did not perturb the normal function of the target, allowing it [to] continue functioning normally in the worm’s brain.

Researchers at the University of Texas were able to alter a common human alcohol target - a molecular channel that binds alcohol in the brain - in Caenorhabditis elegans worms by changing their genetic make-up. Typically, when the worms are put into a petri dish containing alcohol they become drunk and wiggle from side to side more slowly. However, with the modified channel, the worms acted normally. 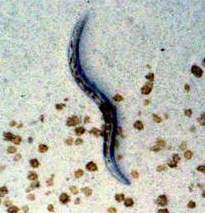