Today’s prosthetic limbs restore many of the functions of missing limbs, but technology for overcoming blindness remains limited. Now, a team of researchers hopes to change that, by developing high-tech clothing that could help visually impaired people navigate. The New York-based company Tactile Navigation Tools is developing a hands-free wearable device called Eyeronman that uses sensors to detect obstacles and can alert the wearer to them with vibrations.

The ones with limb loss are getting expensive devices, but the ones with vision loss — we’re giving them a stick.

Right now, the system is still in the prototype phase. The system converts input from these sensors into vibrations in a T-shirt made from electro-active polymers. For example, an obstacle on the wearer’s lower left would cause the lower-left part of the shirt to vibrate. The system is designed to provide 360-degree obstacle detection. Studies show that visually impaired people use parts of the brain that are normally used for vision to process auditory input, which suggests that the brain is inherently plastic— it continually adapts and forms new neural connections.

There are lots of challenges, but I don’t think any are to the point where we can’t get on top of them. 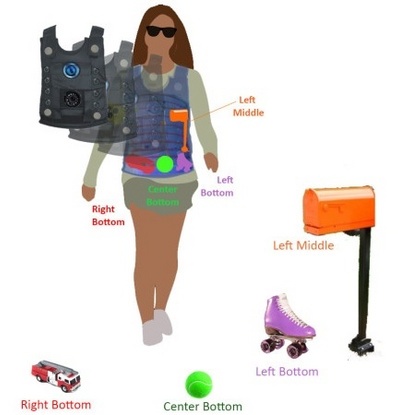