Accusations flew at deadlocked UN climate talks in Lima on Saturday, as the United States warned that failure to compromise could doom the 22-year-old global forum. Running deep into an unscheduled 13th day, the negotiations got mired in a row between rich and poor countries over sharing out responsibility for cutting climate-altering greenhouse gases. Nearly a full day after the scheduled close of the meeting, the chairs of a working group tasked with formulating a text presented negotiators with a proposed compromise. Many rich nations accepted it as a workable blueprint. But developing countries kicked it out, saying the document failed to balance action on tackling carbon emissions with help for vulnerable economies.

It is not time for proposals, it is time for solutions. Let us help each other.

Negotiators in Lima must agree on a formula for guiding a process next year of declaring national carbon-curbing pledges. These will form the backbone of a worldwide accord to limit global warming to two degrees Celsius over pre-industrial levels. To be sealed in Paris in December 2015 and take effect by 2020, the deal would for the first time bring all 196 UNFCCC members into a single arena for cutting greenhouse gases. The Lima talks ran into familiar finger-pointing about which countries should do the heavy lifting. 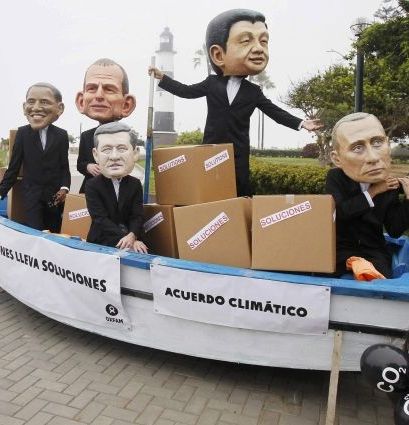