Emergency services are battling to prevent the spread of a deadly fuel depot fire outside Kiev, the head of the emergency services said on Tuesday, and three firemen were reported missing after the blaze triggered a powerful explosion. The fire burned overnight and by morning had spread to at least 16 tanks, most of them storing petrol, sending a huge pall of smoke over the area surrounding the depot near Vasylkiv, 30 km from Kiev. Three firemen were unaccounted for after an explosion ripped through the area as they battled the fire.

At the depot, entire fuel tanks have been destroyed. Nearby, there’s another fuel depot and the main thing is to prevent the fire reaching it.

Interior Ministry official Zoryan Shkiryak said police were investigating three possible causes for the fire. These included “violations of fuel storage regulations, technical malfunctions or arson,” the ministry quoted him as saying. The owner of the depot, BRSM-Nafta, said in a statement it believed the fire was the result of an arson attack, aimed at damaging its business. 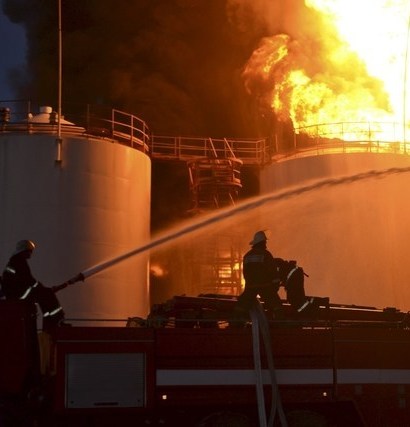