Syrian rebels said they had captured a major base from the Syrian army in the south of the country on Tuesday, a setback that would increase pressure on President Bashar al-Assad after his recent losses elsewhere. Syrian officials could not immediately be reached for comment. State TV had earlier said the army had repelled an attack in the area near the Jordanian border targeted by the rebels early on Tuesday. Liwa 52, or the 52nd Brigade, is one of the biggest Syrian army bases in the area.

We announce the liberation of Liwa 52.

The southern region near the border with Jordan and Israel is one of the areas where insurgents have inflicted significant defeats on Assad in the last three months, notably the capture of the Nasib border crossing with Jordan on April 1.“The Southern Front” alliance has been coordinating operations against Assad from a joint command centre in Jordan. They have received some support from foreign states that want to see Assad gone, including Gulf Arab governments. "It is very important because it is the second biggest base the regime has (in the south),“ said Saber Safar, a former army colonel whose "First Army” rebel group was one of a number of factions that said they took part. 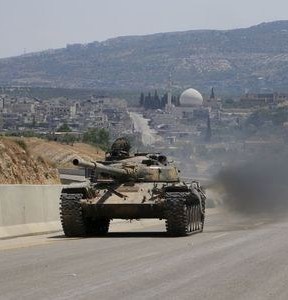