Sony and Adidas have become the first World Cup sponsors to support the probe into accusations that bribes were paid to secure the 2022 tournament for Qatar. The entry of sponsors into the fray will raise the stakes for football chiefs who have threatened to move the cup if the allegations prove to be true. Football’s governing body, Fifa, is conducting an internal investigation into the decisions to hold the 2018 World Cup in Russia and the 2022 Cup in Qatar.

We continue to expect FIFA to adhere to its principles of integrity, ethics and fair play across all aspects of its operations.

Sony, in a statement to The Sunday Times

The Middle Eastern country’s bid has attracted controversy from the outset because of the extreme summer heat during the months when the cup is played and the tiny country’s lack of domestic football tradition. The Sunday Times printed new corruption accusations on Sunday, alleging that then-Asian football chief Mohamed Bin Hammam, a Qatari, brokered meetings between Qatari officials and governments to discuss bilateral trade deals. A former U.S. prosecutor is leading Fifa’s internal investigation. He is due to report in July, around a week after this year’s World Cup finishes in Brazil. 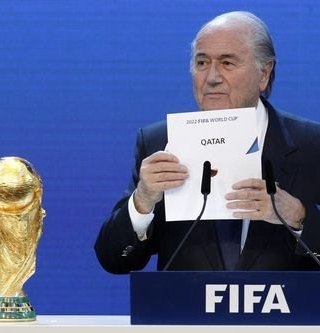