From ‘shoe-banging’ to Ukraine, new archives comb Khrushchev’s past

A new exhibition in Russia reveals fascinating insights and details into the past of Nikita Khrushchev, the Soviet leader who notoriously brandished a shoe at the United Nations — and sowed the seeds of today’s standoff with the West over Ukraine. Over 700 documents and objects are on display — some for the first time — in the Moscow show on the controversial legacy of Khrushchev, who led a de-Stalinisation campaign and eased the repression and censorship of the Communist regime. The exhibition’s curator Andrei Sorokin says his goal is to shatter “myths”. The real facts behind one of the most quoted episodes in Khrushchev’s career, for instance — when he allegedly banged his shoe on his desk at the plenary meeting of the United Nations General Assembly in 1960 — are still being debated, Sorokin said.

There is no evidence [of Khrushchev banging his shoe on his desk] … The pictures of Khrushchev with a shoe in his hand are fake.

Andrei Sorokin, curator of the new exhibition on Khrushchev

The exhibition also features the original decree that Khrushchev — himself a native of eastern Ukraine — signed on Jan. 25, 1954 to endorse the “handover of the Crimean region” to the Soviet republic of Ukraine. In another document, a senior Soviet official, Mikhail Tarasov, justifies the peninsula’s handover due to the “unity of the economy, geographical proximity and close economic and cultural ties” between Crimea and Ukraine. 60 years later, that argument is being turned on its head to justify the region’s return to the Russian fold due to the population’s ties with Moscow. Khrushchev was a reformer who presided over a period of relative liberalisation in daily life and culture dubbed the Khrushchev Thaw and freed millions of political prisoners from Stalin’s GULAG labour camps. Khrushchev himself disliked the term Thaw to refer his time in power, though.

The Thaw is not our term, as weeds grow during a thaw and weeds must be uprooted. 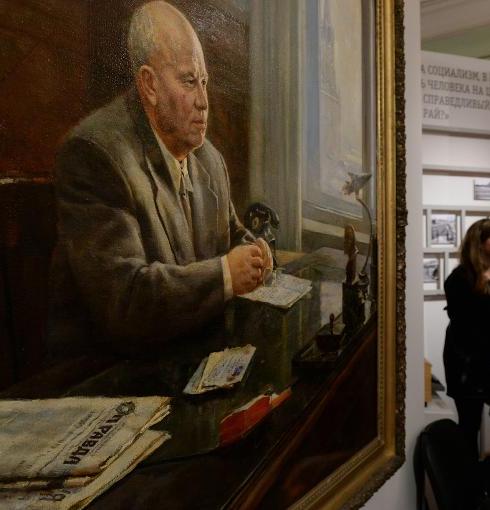