Furious Croatia defender Dejan Lovren branded the penalty awarded against him during Brazil’s 3-1 win in the World Cup opener on Thursday a “scandal”, questioning the referee’s right to be officiating at the showpiece event. Unfancied Croatia took a shock lead when Marcelo put the ball into his own net early in the Group A match before Neymar levelled in front of a jubilant crowd in the Corinthians Arena.

I think this referee didn’t deserve to be here…It’s really disappointing for us because I think we were playing a good game against a big team, Brazil.

But the European side were holding their own in the second half until Japanese ref Yuichi Nishimura pointed to the spot after Fred backed into Lovren and fell. However, Brazi coach Luiz Felipe Scolari was adamant Nishimura was correct to award the spot kick to make the score 2-1. 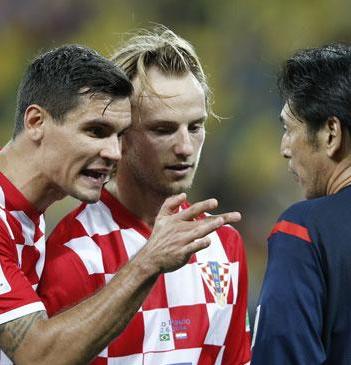