Canada is finally on Twitter. Without great fanfare, the @Canada Twitter account was surreptitiously launched Wednesday morning. The account has been verified, so we can only assume that it’s the official Twitter handle for the country, described in its bio as “Canada’s voice to the world.” In its inaugural tweet, @Canada jocularly established its authenticity with a classic Canadian stereotype: “@Canada’s now on Twitter, eh!” In two other tweets, the account promises to “act as a shop window for everything that makes Canada the best country in the world,” and “will aim to capture the interest of audiences beyond our borders.” Both tweets appeared with the hashtag #DigitalDiplomacy. 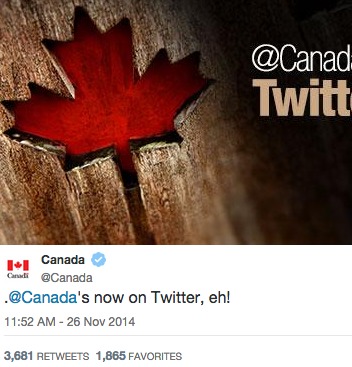