A woman in West Bengal was snatched by a tiger and dragged into a forest as her helpless husband looked on. The couple were trying to catch crabs in a shallow river on August 8 when the tiger attacked the woman and dragged her into the undergrowth of the Pirkhali Forest. Forest guards searched for the woman, but couldn’t find any trace of her. The attack, which happened in the Sunderbans, is the sixth tiger attack this year in the area. Environmentalists say that the diminishing habitat is forcing tigers to venture farther out from the forest in search of food. According to tigerwidows.org, tigers swim up to three miles at a stretch to reach villages in search of food. They also prey on the men who enter the forest to find food and firewood.

They attack the strongest of the men first going straight for the neck. They may take a second and third victim also.

The Sunderbans is India’s vast and tangled mangrove forest where the Ganges River empties into the Bay of Bengal. There are an estimated 500 Royal Bengal tigers in the reserve. According to Bangladeshi authorities, about 60 people are killed by tigers every year in their side of the vast swamp. Tiger attacks have become common in recent years as animal habitats shrink because of human activity. Now every village in the marshland has women referred to as “tiger widows”. 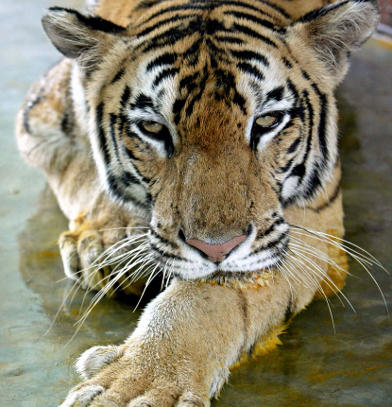