A tour bus plunged into a Tibetan valley on Saturday after hitting two vehicles, killing 44 people and injuring 11, China’s official news agency Xinhua reported. Another five people were in the other vehicles in the accident which happened in Nyemo County, west of the capital Lhasa. The bus passengers were mainly tourists from several eastern regions in China. The injured were being treated at hospitals in Lhasa and did not have life-threatening injuries, Xinhua said. Police have detained the managers of a travel agency and vehicle tour company, blamed for the crash.

The 55-seat bus carrying 50 people fell off a 10-metre-plus-high cliff after crashing into a sports utility vehicle and a pick-up truck.

Fatal road accidents are a serious problem in China, particularly involving the country’s often over-crowded long-distance buses. The ministry of transport says the number of road deaths in China fell from 104,000 in 2003 to 60,000 in 2012, or from about 300 fatalities a day to less than 200. A study published in 2011 by a group of Chinese and US researchers concluded, however, that the number of deadly accidents was twice higher than the police claimed.

The regional government has held an emergency meeting, ordering a general overhaul of road safety and travel safety across the region to avoid similar fatal accidents. 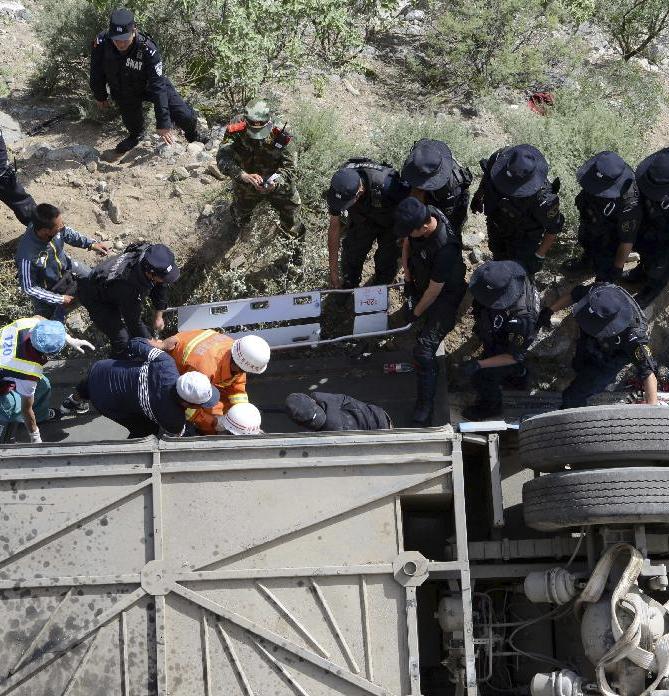