I was raped while I had a paper bag on my head, claims Shia LaBeouf

Shia LaBeouf has claimed he was raped during the performance of his one-man art show #IAMSORRY. The Fury star spoke out about the incident, which happened at the Los Angeles event in February, in an email interview with Dazed magazine. #IAMSORRY featured members of the public queuing to meet the actor, as he sat silently with a paper bag on his head, with the words “I am not famous anymore” written on the front of it. He wrote: “People I’ve never met before came in and loved on me and with me. One woman who came with her boyfriend, who was outside the door when this happened, whipped my legs for 10 minutes and then stripped my clothing and proceeded to rape me…”

There were hundreds of people in line when she walked out with dishevelled hair and smudged lipstick. It was no good, not just for me but her man as well.

Shia, who is undergoing treatment for addiction, admitted the experience wasn’t easy for his girlfriend Mia Goth either. He continued: “On top of that my girl was in line to see me, because it was Valentine’s Day and I was living in the gallery for the duration of the event - we were separated for five days, no communication. So it really hurt her as well, as I guess the news of it travelled through the line. When she came in she asked for an explanation, and I couldn’t speak, so we both sat with this unexplained trauma silently. It was painful.” The #IAMSORRY piece was part of a wider series of performance art by the former Transformers actor, triggered by a “genuine existential crisis” after he was accused of plagiarism when he lifted portions of Daniel Clowes’ short story for the film HowardCantour.com.

I am a deeply ironic, cynical person. I was raised on The Simpsons and South Park, it’s my default setting. 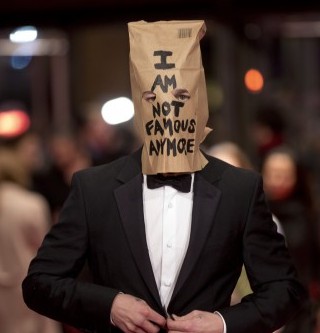