In support of Palestine, US Presbyterians vote to divest from three firms

A leading Christian church in the United States has endorsed a policy of divestment to protest Israel’s policies towards Palestinians, deciding to sell church stock in three companies whose products Israel uses in the occupied territories. The Presbyterian Church (USA) general assembly voted on Friday by a razor-thin margin, 310-303, to sell stocks in Caterpillar, Hewlett-Packard and Motorola Solutions. The nearly 1.9 million member Presbyterian Church USA has about $21 million invested in the three companies.

It was because of divestment that we were able to break the apartheid in South Africa. The church has to make a moral stance for moral justice.

Rabbis and other members of Jewish Voice for Peace, which advocates for Palestinians, lined the halls of the meeting and prayed in vigils outside the convention centre wearing T-shirts that read, “Another Jew Supporting Divestment”. In a separate vote, the assembly also voted to re-examine its historic support for a two-state solution. Heath Rada, moderator for the church meeting held in the US city of Detroit, said immediately after the vote that “in no way is this a reflection of our lack of love for our Jewish brothers and sisters”. 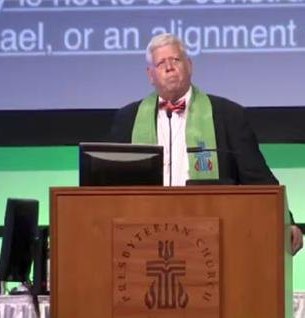