India pledged a slew of regional investments at a South Asian summit this week, seeking to counter China’s growing economic inroads into its backyard as it remains embroiled in bitter rivalry with Pakistan. Indian Prime Minister Narendra Modi said South Asia’s largest economy would fund regional infrastructure, health facilities and even a communications satellite, and promised to free up its markets to exporters in smaller countries in the region. Modi, who won a landslide election victory in May, has made clear that boosting India’s influence in its immediate neighbourhood is a key strategic priority for his Hindu nationalist government.

Sreeram Chaulia, dean of the Jindal School of International Affairs in Delhi

Critics say the previous Congress party government began to take relationships for granted, allowing economic giant China — which shares a border with four of India’s neighbours — to step into the breach. But the failure of the South Asian Association for Regional Cooperation (SAARC) to make any significant progress during a two-day meeting underscored the scale of the challenge New Delhi faces. Cross-border trade among the eight SAARC nations — Afghanistan, Bangladesh, Bhutan, India, Nepal, the Maldives, Pakistan and Sri Lanka — still accounts for less than five percent of total commerce in the region. 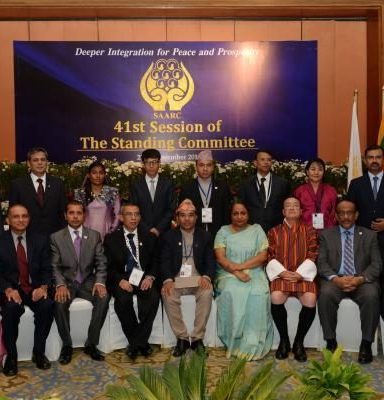