Negotiations over Iran’s nuclear programme have picked up pace with the foreign ministers of France and Germany joining U.S. Secretary of State John Kerry in talks with Iran’s top diplomat ahead of a looming deadline for a preliminary deal. With just four days to go until that target, negotiators in the Swiss town of Lausanne settled in for another round of lengthy sessions that they hope will produce a two-to-three-page outline of an agreement that can then become the basis for a comprehensive deal to be reached by the end of June. Diplomats at the talks say, however, that their presence does not necessarily mean that a deal is almost done. They say some obstacles remain and the ministers are coming for consultations.

Asked at the start of their talks Saturday morning whether they were expecting a good day, U.S. Secretary of State John Kerry Kerry hints that talks will go on into the night

Iranian nuclear agency chief Ali Akbar Salehi described one or two issues as becoming “twisted,” telling Iran’s ISNA news agency that the sides were working to resolve the difficulties. Iran says its nuclear ambitions are purely peaceful, but other nations fear it is seeking to develop weapons. The powers want Iran to shrink its nuclear programme in order to make it easy to detect any dash to make a bomb under the guise of its civilian atomic programme. In return, Iran wants an easing of international sanctions that have excluded the Islamic republic from lucrative oil markets and crippled its economy. It remains unclear what form any deal to emerge from the Lausanne talks would take. Iran’s Deputy Foreign Minister Abbas Araghchi told reporters on Saturday morning that “no text has been prepared”. 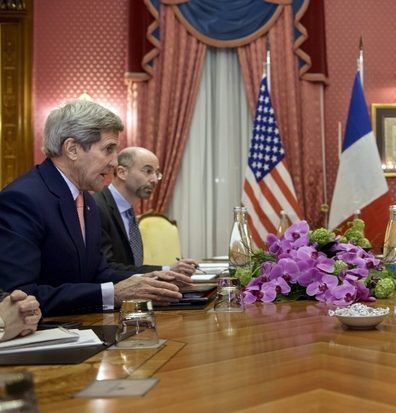